Do not show again [X]
By A.J. Sidransky   2017 October Board Operations 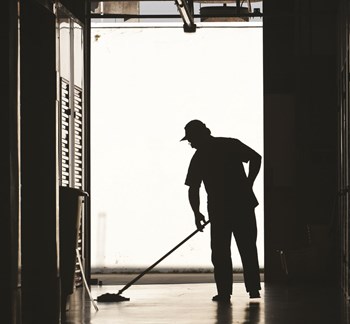 Supers, building managers, maintenance persons, custodial staff, groundskeeping personnel, porters, doormen, concierges—depending on the size of a community, the staff roster for a condo, co-op or HOA can be pretty long. The truth is, in the case of almost any building or association over five units, at least of few of these people are necessary to the effective management and maintenance of the property.

Traditionally in multifamily buildings, whether a high-rise elevator building or garden-style apartment complex, there was a live-in super who handled day-to-day maintenance and minor repair work. When something went wrong, that’s who you called. The sink is backed up, call the super; an electrical outlet doesn’t work, call the super. Need to install an air conditioner? Call the super. All that was required was a small tip to show your gratitude.

All that changed with the advent of owned units, regardless of the form of ownership. In co-op and condo buildings the super, as an employee of the cooperative corporation or homeowners’ association, is there to supervise and maintain the common areas of the building. Anything within the confines of your actual unit is your headache. So, you’d better learn some basic home maintenance skills.

According to Stuart Halper, president of Impact Management, a large co-op and condominium management firm located in New York, “Their duties are pretty general. In a larger building, the super manages the porters and doorman. In a building without porters or doormen, the super manages himself. More specifically, the super’s responsibility is to oversee maintenance and other work, ongoing or case specific. He or she will also do certain types of light repairs, like simple plumbing or electrical work for example. Porters do the daily cleaning, pulling of garbage, vacuuming, dusting, etc. In the event there is no porter, the super will do these jobs. In non-union buildings, supers tend to have somewhat more wide-ranging responsibilities,” due to the fact that union contracts outline job descriptions more thoroughly.

David Levy of Sterling Services Inc., a property management firm based in Holliston, Massachusetts, says emphatically that “There is a direct relationship between resident satisfaction and site staffing level. The role of in-house maintenance personnel in all forms of shared equity residential property, whether it be condos, co-ops or HOAs, is to provide higher and faster service levels than might be provided were these services handled by off-site maintenance staff. This is for several reasons. First, the on-site staff knows the property better. Second, there isn’t any travel time to the property. Third, parts that might be needed can frequently can be pre-stocked on-site. And fourth, the staff knows the residents – including those with special needs.”

Levy also observes that roles and job descriptions often vary by two factors: the complexity and affluence of the property, and whether the community is urban or suburban. “The more affluent the property,” he says, “the more staff is involved in community relations versus physical work. Also, in an urban setting, in a large high-rise, it is prudent to have site staff with a background in mechanical systems. In the suburbs, especially with townhouses that have wooden siding or wooden decks, a background in carpentry tends to be a better fit. For garden-style buildings, a janitorial background is helpful, as there are often common hallways and laundry rooms. The solution must match the needs of the buildings and the service level expectations of the residents.”

The Role of Unions

There was a time when unions were the common denominator in the building maintenance industry. In New York, it was unusual to find a building without 32BJ (the building service workers’ union) membership. Few long-time apartment building residents don’t smile at memories of dragging garbage to the curb or manning their own door during a building workers’ strike in decades past. Those memories are quickly fading, however, as unions increasingly receded from prominence in building operations.

“Not all buildings are unionized today,” says Halper. “A lot of co-ops are unionized because they were before the buildings were converted by their previous owners to cooperative ownership. Some developers of new buildings do bring them in, but most of the newer buildings, though, are not unionized. The unions no longer have the power to come into new buildings and organize as they once did.”

“Unions are more common in urban areas such as Boston, New York, and Chicago,” says Levy. “Alternatively, in the suburbs, in 30 years, I have never seen the need to have a union staff. However, no matter where your property is located, if you have an elevator and other large equipment, the service contractor will likely have a unionized staff. So, even if you don’t directly have a union staff, you must be aware of the status of the contractor’s staff.”

In Florida, unionized staff is even more atypical. Paul Owens, maintenance supervisor for Bayfront  Tower in St. Petersburg, and an employee of FirstService Residential, one of the largest management firms in the country, has no experience with unions and says he’s unaware of any unionized properties in his area. Bayfront Tower is a 29-story luxury high-rise building and has both custodial and maintenance staffs, which Owens supervises. A building of this size and type located in New York, Chicago, or Boston would likely have union employees. The tendency toward union labor is clearly dictated by both geographical and historical factors.

Union membership also affects two other factors: compensation and termination of employment. “In a non-union situation,” says Halper, “supers and others are employees-at-will, and as such can be terminated at will as long as there is no form of discrimination involved in the termination. If there is a union, there is a procedure pursuant to the contract, and generally it’s got to be for cause. Ultimately the union steps in, and there are procedures in place that the corporation or association must abide by. Usually they arbitrate their difference.”

As mentioned earlier, the super and other members of the building staff are often the first line of defense for many apartment dwellers in the event that any work needs to be done – even things as simple as the changing of light bulbs. That can sometimes become problematic in shared equity buildings. Remember that the building maintenance employees, including the super, are the employees of the corporation or association – not handymen-on-call for individual residents.

In most cases, though, boards will allow supers and other building personnel to do ‘private work’ when not on company time. “Some boards prohibit work for individuals, but that’s unusual,” says Halper. “The board should want the super to make a good living, so they allow them to do certain types of jobs within the buildings, primarily on their off hours.”

Levy says that in Massachusetts, “The issue of residents leveraging the skills of the site staff is an unresolved issue, and will always be a hot button.”

The method employed at Bayfront Tower may be the answer to cooling off that hot button. Owens explains that the building staff at Bayfront is permitted to do work inside residents’ apartments, with that work being billed by the hour back to the residents. This works on many levels. It provides the maintenance personnel with the opportunity to make some extra money, and it provides the residents the access to maintenance for their apartments at a price more reasonable than what an independent contractor might charge.

There is no formal training required for superintendents. Halper does say that supers must have a boiler license, issued with the passing of a test. Owens also says there is no formal training necessary, but explains that in hiring, his firm looks for certain backgrounds, skills, and areas of expertise, depending on the position being filled. When looking for a maintenance person for  HVAC work, as an example, they prefer to see some type of formal trade education. They do send their personnel for continuing education in their trades as need dictates.

“Ideally,” says Halper, “the manager works as a buffer between the board and the staff. I tell boards the basic protocol should be that the board speaks to management, and the management speaks to the staff.”  He shares a story of one building he manages where there was some conflict between the super, who had been in the building for many years prior to its conversion to cooperative ownership, and the board. “There was a super who was also a board member. He had purchased a unit at the time of conversion, and had some conflict with the board – so he got himself elected to the board to protect his job!”

Levy recounts a tale of how a board member’s abuse of the system resulted in a real mess. The building required residents who wished to use the elevator for moving large objects like furniture or art to reserve the elevator and put down a deposit to have building staff put up protective pads in the cab to prevent scuffs, dents, and other damage. “If there was no damage [to the elevator cab], that deposit was returned in full, immediately,” says Levy. “The head of the building’s rules committee would not give the deposit, so the building super didn’t put up the pads. There was damage to the elevator, and yes, the sophisticated camera system clarified when and who caused it. The board’s solution was to fire the super, as in their view the he should have put up the pads anyway. As the managing agent, we objected – and we were fired as well, because we billed the board member for the cost of the repairs.” Needless to say, that’s hardly an ideal board/management/staff dynamic.

According to Levy, the key to organizational success in building management was taught to him more than 20 years ago by his mentor. “Everyone must focus their efforts upfront on an alignment of goals,” he says. “If that time is not spent upfront, then much time will be spent frustrated, as each stakeholder is working against the agreed to common, shared, organizational goals.” The lesson is simple: board, management and building employees must work together to achieve the best possible results for the community.

A.J. Sidransky is a writer/reporter for The Western Florida Cooperator, and the author of several published novels.