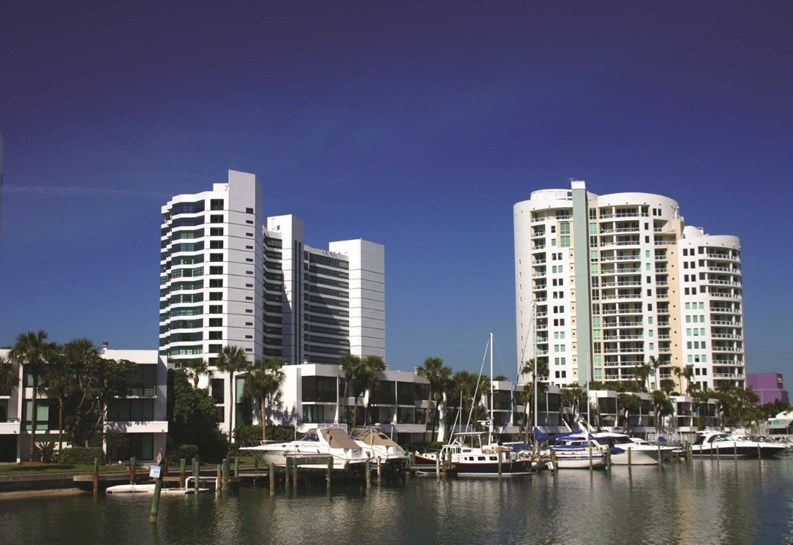 With its myriad of pristine beaches, environmental amenities, upscale boutiques and restaurants, not to mention the abundance of cultural events, Sarasota has proven itself to be a year-round destination for many of Florida and the country’s’ most affluent residents.

Offshore expect to find more than 40 miles of white beaches along a chain of narrow barrier islands stretching from Tampa Bay to Sarasota. To the south, Siesta Key is a residential enclave known for its high concentration of artists and writers. Nearby you’ll find Lido Key, which has an attractive string of family and wallet-friendly hotels and adjacent Longboat Key is one of the country’s swankiest islands.

Europeans first explored the area in the early sixteenth century when a Spanish expedition landed at Charlotte Harbor, just to the south of Sarasota. Spanish was the preferred language of the natives, providing evidence of earlier contact.

By the mid-eighteenth century, the sheltered bay and its harbor had attracted fish and marine traders. As a result, fishing camps (ranchos) sprang up. The camps, established by both Americans and Cubans, traded fish and turtles with merchants in Havana.

After the 1819 acquisition of Florida as a territory by the United States, it officially became a state in 1845. On maps dating back to this time the area was called the Spanish name Zara Zote, which became Sara Sota. European settlers flocked to the area, and these pioneer families were attracted by the climate and the bounty of the Sarasota Bay.

Diversity on the Coast

In the 1840s, Savannah, Georgia native William Whitaker became the first documented pioneer of European descent to settle permanently in the area. After spending time along the Manatee River he built upon Yellow Bluffs, slightly north of present day Eleventh Street. Whitaker sold dried fish and roe to Cuban traders working the coast. In 1847, he started his own cattle business. Four years later, he married pioneer woman Mary Jane Wyatt from the village of Manatee. The couple raised eleven children in often hostile environments, such as constant raids on their home from Seminole Indians. They were never injured but their homestead was burned to the ground in one raid. The resilient couple rebuilt and eventually prospered in the area.

Lewis Colson, Sarasota’s first black settler arrived in the area in 1884 as an assistant for Richard E. Paulson, an engineer for the Florida Mortgage and Investment Company in surveying the town.

The former slave would eventually marry and remain in Sarasota throughout his life and would contribute to the development of Sarasota’s black community in many ways. Lewis and his wife Irene created Sarasota’s first black church, the Bethlehem Baptist Church, by selling land to the church trustees for one dollar. The church was built on the corner of what is known today as Seventh Street and Central Avenue in 1899 (the church remained at this location until 1973).

The Sarasota Times newspaper began publishing in 1899 under the helm of Rose Philips Wilson and her husband C.V.S. Wilson. The paper proved to be a significant communications tool in the development of Sarasota. Rose would continue to publish the paper after her husband’s death in 1910. As a community leader she provided editorial opinions on the issues of the day and was a well-respected journalist among her journalist peers as well as politicians. After the state legislature passed a bill to create Sarasota County, the telegram announcing the new development was sent to Wilson. And when a referendum endorsed the split from Manatee locally, Wilson changed the name of the paper to The Sarasota County Times.

The Circus Comes to Town

Around 1919, the Alf T. Ringling family settled into Sarasota as a winter retreat and made investments in land. The families of Charles and John Ringling followed suit. During this time, the Ringling Brothers Circus officially established its winter home in Sarasota.

Charles Ringling invested in land, founded a bank and eventually a college in the area. He was also an active participant in Sarasota’s civic life, giving advice to budding entrepreneurs and loaning money to fledging businesses. The philanthropic-minded Ringling also donated land to the newly formed county where its government offices and courthouses were eventually built.

The village of Sarasota was incorporated for local government as a town under state guidelines in 1902 with John Hamilton Gillespie as mayor. It was re-platted in 1912 and its government then was incorporated as a city in 1913, with A. B. Edwards as mayor. By 1924, the land boom was in full swing. Real estate values were skyrocketing and land transactions occurred so quickly there wasn’t enough time to get an abstract on a lot or parcel of land. To accommodate the burgeoning population the county passed government bonds to build new schools all over the county including Sarasota High School, Bay Haven School and Lauren School.

Noted entrepreneurs and benefactors included Bertha Palmer, full name of Bertha Honoré Palmer. She was the region's largest landholder, rancher, and developer around the start of the twentieth century, where she purchased more than 90,000 acres of property. She was attracted to Sarasota by an advertisement placed in a Chicago newspaper by A. B. Edwards. They would maintain a business relationship for the rest of her life. The Palmer National Bank, established on Main Street at Five Points, remained a strong bank led by her sons through the depression and merged with Southeast Bank in 1976.

In 1926, Sarasota proper drastically began to decline. Prices had gone so high that real estate agents could no longer find buyers. Property owners were weighed down with heavy debt and began selling their properties at give-away prices. The roaring twenties came to an early, abrupt end for Sarasota.

The post–World War II decade of the 1950s was reminiscent of the 1920s land boom. Shopping centers made their debut, citrus groves were replaced by housing developments and the population swelled. According to the 1950 census there were 29,000 people in the county, the following decade the population almost doubled.

Retirees, snow birds and sun worshipers flock to Sarasota because there is so much stimulation and entertainment. The Sarasota Film Festival, the Chalk Festival (an international street painting festival), Sarasota Ballet, Sarasota Opera and Banyan Theater Company is only a sampling of the city’s cultural attractions. Sarasota is also home to Ed Smith Stadium where major league baseball’s Baltimore Orioles has spring training. Breaking Amish: Brave New World is a television series set in Sarasota in the neighborhood of Pinecraft. It is a spin-off of Breaking Amish. A well-known native of Sarasota is Nik Wallenda, of the famous tightrope walking family, who is known internationally for walking across Niagara Falls and the Grand Canyon. Many circus performers have been known to make their homes in Sarasota even though its winter home moved some years ago to Venice, Florida. A museum dedicated to the history of the circus is still housed in Sarasota.

Recent housing prices have increased, according to Trulia.com. Average price per square foot for Sarasota was $165, an increase of 14.6% compared to the same period last year. The median sales price for homes in Sarasota from December 2013 to March 2014 was $200,000 based on 921 home sales.

Compared to the same period one year ago, the median home sales price increased 14.4%, or $25,112, and the number of home sales decreased 25.6%. There are currently 3,124 resale and new homes in Sarasota on Trulia, including 74 open houses, as well as 2,886 homes in the pre-foreclosure, auction, or bank-owned stages of the foreclosure process. The average listing price for homes for sale in Sarasota was $600,195 for the week ending March 5, 2014, which represents an increase of 0.2%, or $1,125, compared to the prior week. Popular neighborhoods in Sarasota include Arlington Park and Lido Key, with average listing prices of $215,200 and $1,276,233, respectively.

So if you’re looking for a nice resort community in which to put down roots, consider Sarasota as a place to call home.

Christy Smith-Sloman is a staff writer for The Western & Central Florida Cooperator.