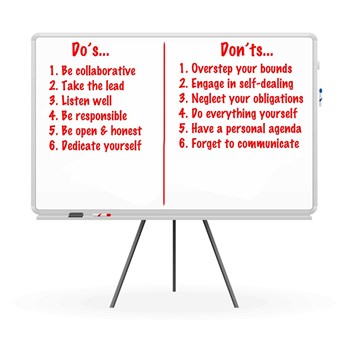 It only takes a few minutes of a web search to uncover the traits that make a successful person or business owner. For example, Entrepreneurmagazine’s Steven Key wrote the article, “5 Qualities of Successful Persons,” which included such traits as open-mindedness, unwavering passion, and a forward-looking approach. But what make a board, which is made up of individuals volunteering their time, a successful one?

The definition of collaboration is the act of working with another or others on a joint project. “Members of an effective and successful board are all on the same page,” says Dale Young, director of portfolio management, FirstService Residential, with offices in Chicago and Florida. “They are seeking improvements and infrastructure that is in the best interest of the community. In a successful board there are no personal agendas. The board should be serving in the best interest of the association as a whole.”

“It is better to lead from behind and to put others in front, especially when you celebrate victory when nice things occur. You take the front line when there is danger. Then people will appreciate your leadership,” said Nelson Mandela.

Leaders also make sure they are educated about their responsibilities. “All board members should receive an education on fiduciary duty to fully understand what they are being held accountable for in their important role,” says Young.

“Boards need to listen to the advice we give them,” says James Miles, president of Consolidated Community Management in Tamarac. “They should always be looking at their number one goal, but they should have a few goals. A successful board stays within their budget, but is always looking for an improvement project, always want to make the community better. Five years ago, one community had $800K in delinquencies, and five years later they have less than $100K in delinquencies. They listened to our advice and guidance and we gave them enough love. They approached every person that owed money and got them to pay or get on a plan.”

Actor and professional wrestlerDwayne “The Rock” Johnson had it right when he said, “Know your role.”

“Boards that are able to take criticism and learn from mistakes are also more successful,” says Glazer. “For example, it is too easy to dismiss and try to shut up the unit owner who appears at every board meeting only to complain about everything as some nut or crazy person. I learned a long time ago that even a broken clock is right twice per day. The person complaining about a dozen things is probably right about at least 2 or 3 of them and the failure to address those two or three items can cause the association to be sitting at the defense table side of the courtroom wondering how they got into this position.”

Life is what happens to you while you're busy making other plans.” —Allen Saunders

Allen Saunders’ quote might sound like a new-age way of thinking, but the reality is that while you’re planning for today, tomorrow is coming fast, so it’s important to have a board that thinks about the ‘what-ifs,’ even when nobody wants to. As a matter of fact, thinking about tomorrow is one of the most important things a board can do for the success of the property. Successful boards are also those who look, not just at today’s issues, at tomorrow as well.

“Boards who get elected and think that their sole responsibility is to keep costs down, even if the place is falling down around them are absolutely doomed,” says Glazer. “There’s no question that unit owners hate when the monthly assessments go up. The only thing they hate more however is when their property is in deplorable condition. Board members have an obligation to make sure the condominium or HOA is always in good shape in terms of its cleanliness and appearance. Spending a few bucks to keep it that way won’t get the Board voted out, but letting the place deteriorate is a sure fire way to be sitting in the audience next year instead of sitting at the dais.”

“We all have dreams. But in order to make dreams come into reality, it takes an awful lot of determination, dedication, self-discipline, and effort.”— Jesse Owens

Boards can learn from other boards anywhere in the country, who are dedicated and determined to success. For example, George Kotnour, president of Marian Realty in Hyde Park, Chicago, has been in the property management business for 47 years and currently manages approximately 30 condo and co-op properties, so he’s seen his share of boards through the years. He says the most successful ones have members who stay on the board for an undetermined amount of time. “I have found that the most important aspect of a successful board is that they don’t change every year,” he says. “Changing every year makes for a disjointed board.”

Kotnour also manages three-story walk ups that are between 70 to 100 years old. To protect the properties, Kotnour says that his company arranged to have all of the plumbing in the entire building replaced. “We replaced risers, gas lines and anything that has to do with plumbing, so they are set for almost 40 years,” he says. “That board looks to the future and it pays off because when a unit goes on the market there, it doesn’t stay on for more than a month and a half before it’s sold. There also aren’t going to be big special assessments because it’s a well-cared for property.”

Be Respectful of Other Opinions

The famed comedian Rodney Dangerfield made it his mantra that he gets no respect, but the last thing you want is for board members and unit owners to feel that way. In one of Glazer’s blog posts, he suggests the top 10 New Year’s resolutions that property managers should follow.

“Learn to appreciate that the members of your board are unpaid volunteers, the overwhelming majority of whom ran for the board to simply make their community a better place to live,” he writes. “Not everything that goes bad in a community is their fault. Your assessments are going up for example because insurance rates are going through the roof, not because of anything wrong your board is doing.”

Be Open and Honest

“It is better to offer no excuse than a bad one,”—George Washington

“Don’t take money that doesn’t belong to you, don’t take kickbacks for awarding contracts to certain vendors, don’t single out certain owners for prosecution while friends are allowed to get away with the same behavior and most of all, listen to your lawyer,” says Glazer.

On the flip side, some boards struggle and succumb to pitfalls. “Political in-fighting can cause a board to be completely ineffective,” says Young. “You will never accomplish association business when members are fighting each other instead of figuring out how to work with each other. Respect one another’s opinions, even if from another vantage.”

By studying and implementing these traits, the board has a greater chance of success and longevity, without serious problems.

Lisa Iannucci is a freelance writer and a frequent contributor to The South Florida Cooperator.