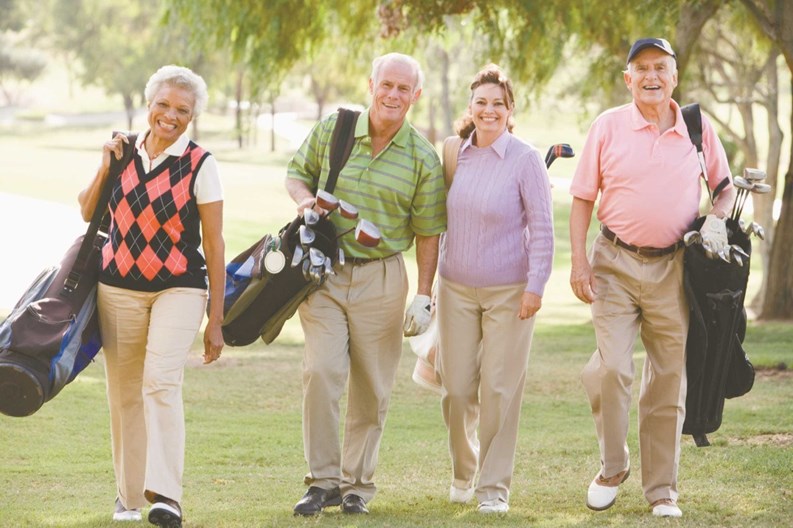 Norman and his wife, Maxine, moved to Century Village at Pembroke Pines in 2001. He retired in 1998 after 37 years as owner of Tippy Togs of Miami, a manufacturer of children’s wear. “Our house in Miami was too big,” he explains, “and Century Village was within an hour’s drive of our family.”

Maxine died several years ago, but Norman stays on. “It’s a good place to make friends,” he says. “You meet a lot of people from different walks of life. You sit around in the clubhouse lobby and talk. There are 50 or 60 clubs, for Italian, Spanish, Yiddish, art, playing cards, you name it—and social clubs galore to take people to different attractions.”

Century Village at Pembroke Pines operates a trolley system that circulates through the community, stops at the clubhouse, and goes outside to a nearby shopping center. It’s a lifeline for Reinhard, who no longer drives.

The 135,000-square-foot clubhouse includes meeting, game, and party rooms; a health club; and a 1,042-seat theater with entertainment almost every night, sometimes free, sometimes at nominal cost. “They bring in entertainment from Broadway in the winter months,” Reinhard says. “To go to a show up there costs $50, $100, or more. Here it’s $5 to $8. There’s an in-house restaurant called George’s that serves breakfast, lunch, and dinner. You can go for dinner at George’s and then see a show.”

Still another attraction is the presence of three synagogues—orthodox, conservative, and reform. That’s important for observant Jews who won’t drive or ride the trolley on the Sabbath. “Each synagogue has its own rabbi, and the conservative and reform congregations have a cantor, too,” Reinhard reports. Residents of other religions attend nearby houses of worship, and sometimes hold services in the community.

Century Village at Pembroke Pines has more than 7,000 apartments with 27 different one- and two-bedroom floor plans ranging in size from 603 square feet to 1,533 square feet. Three other Century Village condominium communities in South Florida are in Boca Raton, Deerfield Beach, and West Palm Beach. All were built from the early 1970s to the late 1990s, and all cater to the same age-restricted active-adult demographic.

“Age-restricted” means one member of a family has to be at or above the minimum age set by the developer (55 at Century Village), although the other may be younger. Each development sets its own limit. If the older member of a couple in residence dies and the younger member is under age, the survivor may be able to stay on, or not, depending on that community’s specific regulations.

The legal basis for these age restrictions is an exemption from the anti-discrimination provisions of the 1968 Fair Housing Act. The exemption allows “senior housing” developments where an individual 55 or older occupies at least 80 percent of the units.

If both members of a couple die and bequeath their condo to younger family members such as children or grandchildren, the heirs may not live in it, and in some cases may not even continue to own it. Associations in such communities have sued and won court battles to maintain their age-restricted status.

The rules allow younger people to visit for a limited period of time, typically two weeks, but spending the summer at “Camp Grandma” isn’t an option. “Some communities have a playground for children, and visiting kids can swim in the pool with adult supervision, but they’re not going to load up with activities for kids. It’s not what they’re there for,” says Tom Wetzel of the Retirement Living Information Center, Inc., in Redding, CT, a resource and advocacy group for older Americans.

Age-restricted active-adult communities are “the fastest growing segment” of South Florida’s housing market, says Scott Agran, President of Lang Realty in Boca Raton. “It’s the bright spot. It will continue to drive developers and developments, and will be an extremely vibrant market for the foreseeable future because the baby boomers are coming. Some developments fill up as fast as they can be built.

“All of the baby boomers are in some stage of considering retirement or retiring,” he says. “They’re sitting up north and want to come to a warmer climate.” He explains that affluent individuals who in the past might have chosen a country-club community and paid $20,000 to $30,000 extra in annual fees for food, golf-cart rentals, golf minimums, etc., are eliminating these recurring expenses by selecting a newer active-adult community that includes the lifestyle amenities without the additional fees.

“By the year 2020, as baby boomers move into this age bracket, almost 45 percent of all U.S. households will include someone at least 55 years old,” Crowe said. “The number of those households seeking housing better suited to their changing needs will therefore rise dramatically.”

In 2011, the Census Bureau estimated the U.S. population over age 55 at 76.163 million. “If they all came to Florida we wouldn’t have a place to put them,” Agran says. “Even if 10 or 20 percent come, that’s just a huge number, and what better place to be active than Florida and South Florida in particular. We haven’t seen the tip of the iceberg. With the economy stabilized, we’ll see more activity in that market.”

The concept of an age-restricted active-adult retirement community began with Delbert Eugene “Del” Webb, a construction contractor and real-estate developer who co-owned the New York Yankees baseball team from 1945 to 1964. He started building the first such community, Sun City, AZ, in 1960. Later his company built others in Arizona and near Tampa, FL. Today Webb’s firm is a subsidiary of PulteGroup, Inc., a public company traded on the New York Stock Exchange.

Another long-time Florida participant in this market segment, GL Homes, is a privately held firm based in Sunrise. It began in 1976 and today operates in Broward, Collier, Hillsborough, Indian River, Lee, and Palm Beach counties. More than 63,000 residents live in its homes.

Age-restricted communities may consist of condominium apartments, single-family homes, or a mix of both. Like other private residential communities, they have an association with a board of directors, and usually a professional manager or management company.

Residents must meet the community’s age requirement. Otherwise, the only barrier to entry is affordability, to purchase the residence and pay the association’s periodic assessments covering maintenance and operation of the common areas and amenities. “Sometimes the monthly fee also includes insurance and property taxes,” Wetzel says.

“You pay a premium for a controlled environment,” Agran says. “These properties are kept at a certain level that enhances value, and there are costs associated with that. You get a gated, safe, secure community, with a harmonious look and feel, more attractive in general and with more conforming neighbors.”

Wetzel advises people considering such a community to “have a clear understanding of what the association will do for you and in what time period,” such as trimming trees and keeping the common areas in repair. Painting the building exteriors may entail an assessment on top of the monthly fee. Many individual owners also buy an insurance policy covering repairs within their own home or apartment. “That’s a must,” Reinhard says. “The buildings are starting to get old, so you have to bring everything up to date.”

What You Can’t Expect

As the name implies, active-adult communities are for people with the vigor and vitality to take advantage of their community’s many activities and amenities. Some still work full or part time; others have retired and spend their days in recreational pursuits. For some, the community itself becomes a form of recreation.

“Managing a bunch of people who have had some success in their life, who have too much time on their hands and know everything—when you get a group of them together, it’s not an easy situation,” Agran says. “Trying to get a consensus among them can be a challenge.”

“Active-adult communities offer no assistance with daily-living activities such as meals, medication, housekeeping, and personal care,” Wetzel says. “When you buy into an active adult community, you do not buy in to get health services.”

“You may have seminars and lectures on wellness, but this is not an assisted-living situation,” Agran concurs. “It’s more of a place for social interaction with mature adults whose kids are grown. These people don’t consider themselves to be old and at their final place of residence.”

That’s the theory, but what happens if the residents don’t move elsewhere as they age and become less independent? That’s happening in Norman Reinhard’s section of Century Village at Pembroke Pines. Reinhard moved there at age 78. Now he’s 90. Recovering from a recent serious illness, he employs a live-in aide who sleeps over on weekdays, using his apartment’s second bedroom. He says many other residents have a similar arrangement.

“You see a lot of people with walkers,” he confides. “One gentleman who plays cards with us is 100 years old.”

The community has no clinic or well-patient care, but a nurse is available for emergencies. A fire department rescue squad is stationed just outside one entrance, and the nearest hospital is less than 10 minutes away. “Every apartment has an emergency button,” Reinhard says. “Press that button and the nurse comes in a couple of minutes, followed immediately by the rescue squad—which stays very busy these days.”

As the residents age, turnover in the community increases. “People pass on, or the kids want the parents to move back up north, and the apartments are vacant,” Reinhard says. “A lot of people rent. You can get a two-bedroom, two-bath apartment for $750 to $1,000 a month, plus the maintenance fee to the association. To check out the lifestyle, that’s the way to go.”

George Leposky is a freelance writer and is a frequent contributor to The Western & Central Florida Cooperator.